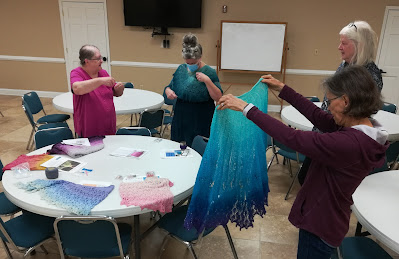 Sharing is one of the big benefits of guild meetings and that is especially true for study group meetings. Recently, a member mentioned online that she is interested in knitting with beads. A few days later at the spinning study meeting, Deborah Naramore (far left) brought six amazing hand-knitted and beaded shawls with packages of the beads she used, the patterns, and a tiny crochet hook to demonstrate how she places the beads as she knits. YouTube is great, but getting to ask questions and hold beautiful things in your hands is so much better.

The spinning study group is currently meeting in person on the fourth Wednesday of every month at 10:00am at St. Peter’s Catholic Church in Hoover. There is a roll call a few days before every meeting on the guild members' Facebook group.

Spin & Weave Night is a group of spinners and weavers that meet at night, the first Thursday of each month on Zoom in the GBFG Study Group Zoom room, 6:30 to 8:00pm. They use email and a Ravelry thread, Spin & Weave Night.

The band weavers study group has been on hiatus, but has been talking about resuming their meetings. They were meeting on the third Saturday of every month at the Hoover Public Library and those in person meetings may start back soon. This group communicates via an email group and a Ravelry thread on GBFG's forum, Band Weaving.

A new study group was recently organized by guild members who share an interest in quilting. They are meeting in the guild's study group Zoom room on the first Saturday of each month at 1:00. There is also a Ravelry thread, Quilting Quests, used for conversations and information sharing between meetings.

If you are interested in any of our study groups, contact them through the guild members' Facebook group or their Ravelry group thread by following the links above.

Posted by Mary Spanos at 2:18 PM No comments:

The guild's spinning study group will meet in-person this Wednesday, 10:00, at St. Peter’s Catholic Church. Park in the back, come through the big double doors, walk straight to the back wall and turn left. The room is big, so everyone can spread out. Everyone is welcome!

Posted by Mary Spanos at 5:15 PM No comments:

Rainy picnic? Why not!

The weather forecast says it is going to rain early tomorrow. The pavilion is going to be there, rain or shine. Bring a towel, bring a lunch, bring your Show and Tell in a rain-proof bag and come anyway. Plus there will still be door prizes, or pavilion prizes (because there are no doors), or rainy picnic prizes!
Posted by Mary Spanos at 8:34 AM No comments:

There's a new yarn store in our area!

The Shelby County Reporter posted a story about Paper Crane Yarns, a new yarn store in Calera. Ashley Jeffcoat, the owner, is also a dyer. Supporting an independent yarn shop seems like a great excuse to buy yarn, or maybe a project bag!

Posted by Mary Spanos at 6:04 PM No comments:

Reminder about the date of the picnic

Posted by Mary Spanos at 3:10 PM No comments:

Online presentation April 26 from the Textile Society of America

$10 TSA Members / $15 nonmembers. You will receive a Zoom link in your registration confirmation email. To become a TSA member and support programs like this, join here.

This event is one in a series of four presentations offered through this year. The cost is for this April 26 event.

Posted by Mary Spanos at 9:21 AM No comments: 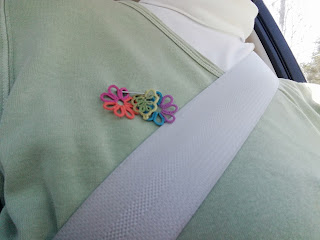 Happy International Tatting Day! The traditional way to celebrate is to tat, wear something tatted, and eat chocolate. What a great tradition!

ETA: The Crochet and Tatting study group of the Greater Birmingham Fiber Guild will celebrate International Tatting Day on Saturday,  April 2, by having our first in-person gathering since the pandemic began. We'll meet at the Pelham Public Library at 10:30 to tat together with a mini class taught by Julibeth Jones. Details are posted on the group's thread on the guild's Ravelry forum.

ETA: Apologies to Julibeth. I'm sure we all prefer her real name and not the misspelled version originally posted.

Posted by Mary Spanos at 9:28 AM No comments:

Online, the guild can also be found at: